Socializing with more than 140 characters at Vancouver Twestival 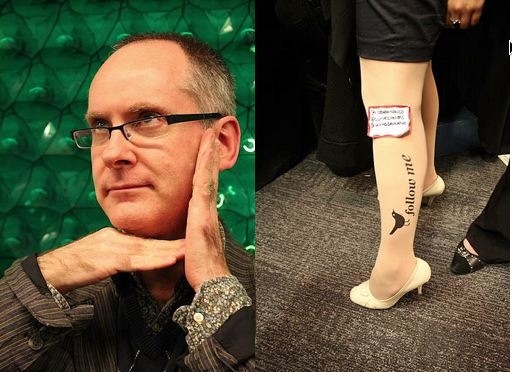 A rainy day in Vancouver presented an interesting opportunity for Tweeters of all stripes to come together this past Thursday at the CBC radio building for the second
Vancouver Twestival (#YVRTwestival, #Twestival ). Beyond being a chance to meet all the people they previously only knew online, the Twestival may just demonstrate how the face of fundraising could forever be altered by social media. Indeed, the attendance of between a 150-200 people successfully raised over $9000.

Nick Molnar ( @nickmolnar ) is a self-described web-strategist who has worked on several social media projects in Vancouver and recently started a web-site called adoptaband to pair indie musicians with aspiring photographers to boost the profile of both. He describes his most recent endeavor as a means of making poor people less poor as opposed to making wealthy people more wealthy. He’s been excited to watch the emergence of Twitter as a real force for social change. “If this were a gathering of all the people on Twitter in 2006, it’d be pretty boring,” noting that the existence of these tools becomes even more powerful when real people start to use them.

Danielle Sipple (@fiercekitty) agreed that Twitter is an amazing forum for bringing together people of many stripes and giving communities that otherwise would not interact the chance to do so. A “word nerd” whose been tweeting for over a year and a half joined because she found it fascinating before any of her friends has even heard of it. She follows 600 people and is followed by around 1700. Danielle noticed her initial Tweets have evolved from snarky insights into her own personal life to more profound and reflective and less self-deprecating as a function of how her way of being and community have changed so much with her involvement in the Twittersphere.

There were plenty of folks on hand helping out the local organizer Rebecca Bollwitt (@miss604) who were stoked about the charity benefiting from the efforts of the Twestival, Concern Worldwide ( @concern). Kirsten (@6oz) is inspired by their holistic approach to combining health care and education strategies to the alleviation of poverty, although a few people I talked to knew only the basics about the organization, gleaned from the link on the Twestival website. So although a few people mentioned the “good cause” they were supporting not many actually knew a whole lot about the charity itself, which in no way detracted from their enthusiasm for the event and socal media itself. Second year marketing student at UBC’s Sauder School of Business, Vivian Lou ( @vivianlou) was exuberant about the power of Twitter for social good. She went so far as to say “social media is breaking down the old school corporate culture.” When I asked her to clarify she proclaimed, well, if they want to know how to be effective in social media, they have to come to us. It was a powerful, confident statement delivered with an assured smile.

After the event I spoke with Vancouver Twestival organizer, Rebecca Bollwitt.
“We don’t have all the silent auction donations in yet but our grand total is above $9,000 so far.

From what’s been calculated an inputted globally (see here: ) it looks like Twestival around the world has already raised enough to build 18 schools, provide close to 12,500 meals, and educate over 3,000 children with Concern Worldwide.
In Vancouver it’s about getting out from behind your computer and being social with those you know through your social networks. So many people met for the first time last night even though they had been communicating over Twitter for years, it was great to see those connections. The fact that this is 100% volunteer-driven and that it’s all for a cause makes it that much better. As you can see from the numbers, this is our most successful Twestival yet in Vancouver – we have doubled what we raised last February at the first Twestival and tripled what we did in September at Twestival Local. This is my third time organizing and my first time rallying an amazing team to help out. Azita, Kirsten, Kim, Melissa, and Sonia were key. They worked the door, brought prize sponsors on board, and gave valuable input. Marc Smith from Amuse Consulting donated his event planning services which were a big part of the event’s success.
Volunteers, organizers and sponsors were all rallied through Twitter – it’s just so amazing that social media can be used for social good.”

Trina’s comment on why she is at Twestival: “My New Year’s resolution was to meet new people and socialize more.”

Janis Behan ( @janisbehan ), Erin Buttler ( @EzzaAtGap ), Emily Inram ( @emilymarieinc )Erin’s comments: “I came to socialize. It’s a great opportunity to meet other twitter peeps. I work for an adventure Travel company. I’ve been on twitter for a year, and I’m learning it for business. “

Susan Main ( @susanmain )Comments: “I’m not here for business, but to socialize and meet people who I follow on twitter more than I should. I go to lots of tweetups.”